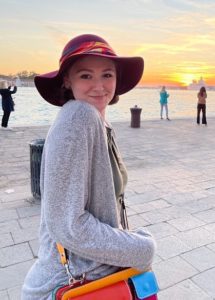 After spending five years as a student in Shakespeare Troupe and Shakespeare in Performance winter shows, Ariel Noble (she/they) is about to experience her third year on staff. Ariel spent the past two summers assistant directing for the Thespian Ensemble, and they are so excited to share the magic with the Shakespeare Ensemble this summer! This fall, Ariel will be a senior at Muhlenberg College, where she is majoring in Theatre with a concentration in Acting. At Muhlenberg, Ariel has been an actor in many productions, coordinated a twenty-four-hour arts festival, and has acted as the Performance Ensemble Committee head for their school’s theatre board. Ariel is a member of Artist Collective, a performance art group. This past fall, she spent a semester studying Commedia dell’Arte and other types of physical theatre at the Accademia dell’Arte in Arezzo, Italy. She has a liberal background in musical and classical theatre as well as multiple styles of dance. Outside of theatre, Ariel enjoys the Twilight Saga, juggling, aerial silks, and their cat, Pickle. They cannot wait to have the best summer ever!