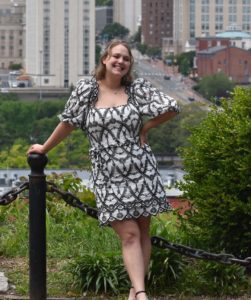 Katie is a recent graduate from Virginia Commonwealth University (VCUarts) with a BFA in Theatre with a minor in Education. Katie was selected to serve as Comedy Consultant for the VCU Undergraduate Research Grant Production of Noises Off. As such, she offered assistance in standup comedy, physical comedy, and hosted a Comedy Night Performance for the cast and community. She was the president of VCU’s student theatre, Shafer Alliance Laboratory Theatre and the team captain for the VCU house improv team.

Katie can’t wait to be at camp this summer! In fact, she is already planning all of the fun games and activities for her rehearsals!