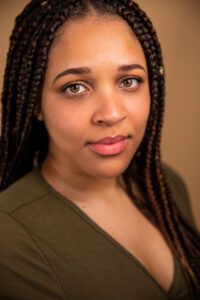 Kennedi Roland (she/her) is a rising senior BFA acting major at Shenandoah Conservatory. Originally from Springfield, VA, Kennedi has been pursuing her passion for theatre for over 10 years. Starting in middle school with aspirations of being an actor, Kennedi has been able to hone her acting skills throughout her undergraduate journey, while being able to explore and try her hand in directing, writing, choreographing and producing. In her time at Shenandoah, Kennedi has stepped up as Head Board Member of Hypnos Theatre and Performance Company, a completely student run theatre company that focuses on furthering inclusivity in terms of gender and diversity; In addition to being the President of “Shut Up, It’s Shakespeare!”, a student led group that produces two full length Shakespeare shows a year. This past semester Kennedi had been fortunate enough to direct Ntzoke Shange’s For Colored Girls and Shakespeare’s classic comedy, A Midsummer Night’s Dream. As Kennedi continues to pursue a career as a theatre maker, she is not only excited to grow as an artist herself, but to open doors for the next generation of young artists to come in after her.