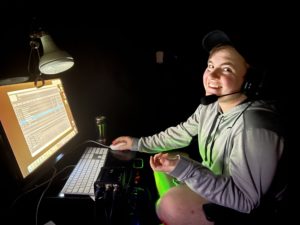 Parker Lawrence (he/him) is super excited to be joining Traveling Players for the first time this summer. He is currently a rising senior at Bennington College where he studies theatre and literature. He has enjoyed working in theatre both as an actor and techie since elementary school. He went to Henrico High School in Richmond, VA for their Center of the Arts program, where he concentrated in theatre. Parker has worked in several elements of theatre, but enjoys the loud noises of the scene shop and the heights of lighting the most. He has worked on several productions ranging from faculty performances to pop-up student productions. Such productions include; Gloria, Everybody, H&G, Salt of a Bird’s Tail (student work), and Denial of Service (student work). In his free time, he enjoys writing his own plays, playing video games, and painting.