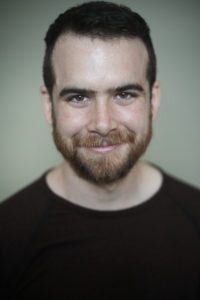 Jeffrey Robb (he/him) is a Brooklyn based actor/writer. He received his BA in Theatre from Muhlenberg College, where he concentrated in Acting and Performance Studies. While at school he spent a semester studying Commedia dell’Arte at the Accademia dell’Arte in Arezzo, Italy. Upon his return to Muhlenberg, he won leading roles in both mainstage productions of The Marriage of Figaro and The Winter’s Tale, and eventually earned his program’s Artist Thinker award. Recent credits include playing Macduff/Demetrius in The Adirondack Shakespeare Company’s productions of Macbeth and Midsummer Night’s Dream, respectively, and performing in The Woolgatherers Theater Group’s Writing For Rights reading series. While living in New York he has been running ongoing cooperative role-playing games for young students and worked as a tutor for Chess at Three, an educational program that specializes in teaching chess and game theory through storytelling.

Originally from Washington DC, Jeffrey has spent eleven summers with Traveling Players, six as a camper and another five as an assistant director for ensembles in middle and high school. For summer 2021, he was the Assistant Director for Shakespeare Troupe’s The Taming of the Shrew and taught Acting Technique and Text to campers in grades 4-12. This past school year he helped launch Traveling Players’ D&D Improv program, running games of Dungeons & Dragons for elementary, middle, and high schoolers every week. Additionally, he worked as Assistant Director for the fall and winter shows, Dust and Antigone. Jeffrey won the Staff Ensemble Award back in 2011 for captivating all the middle school campers on Thursday night campouts by narrating epic tales in which each camper appeared in a starring role.