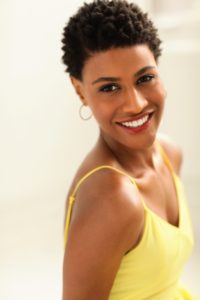 Jenay is a graduate of University of Maryland with a B.A in Theatre and specializes in Musical Theatre. She has spent time as an Assistant Director at Duke Ellington School of the Arts and Vocal Coach for the production of Twilight Los Angeles 1992 for the University of Maryland’s Theatre for Dance and Performance Studies students. She most recently was on tour with The Color Purple 2nd Nat’l Tour as a Swing and sometimes ASM. She has performed at Signature Theatre (Jesus Christ Superstar), Constellation Theatre (Avenue Q), and also worked on Disney Cruise Line as a Main Stage performer and vocal captain.

Jenay finds it difficult to be in one place for a very long time so naturally she loves to travel. One of her favorite destinations is Alaska during the summer for the wildlife and beautiful hikes. Jenay always encourages everyone to be one hundred percent themselves because no one else does it better.