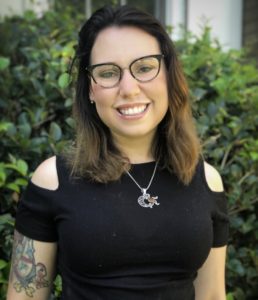 Morgan (she/her) joined the Traveling Players community in 2007 as a student in the Thespian Ensemble and spent 6 wonderful summers as a camper and actor. Since then, she has been thrilled to lead the Thespian Ensemble, as a Director (The Odyssey, The Blue Monster, PUFFS or Seven Increasingly Eventful Years at a Certain School of Magic and Magic, The Thief Lord), Designer (Hecuba, The Odyssey, Ariadne’s Thread, The Blue Monster, PUFFS, The Thief Lord, Charlie and the Chocolate Factory Tartuffe, Rumpelstiltskin) and Assistant Director (Charlie and the Chocolate Factory, Rumpelstiltskin, Tartuffe, The Doctor In Spite of Himself).

Morgan has worked in arts administration since 2015, with a focus in marketing and sales, including with Signature Theatre’s box office in Arlington, Virginia. She holds a BA in Theatre from the University of Mary Washington with a concentration in Directing.

Other recent artistic work includes Director Mojo at Studio 115, working as the Assistant to the Director for The Country Wife at the University of Mary Washington and Assistant to the Director for Smile Lines at Signature Theatre in Arlington, Virginia. Morgan has also worked as Designer on productions such as Arachnophobia at George Mason University (puppets) and Mindset: A Surrealist Rock Opera with Off the Wall Productions at the DC Capital Fringe Festival (costumes).