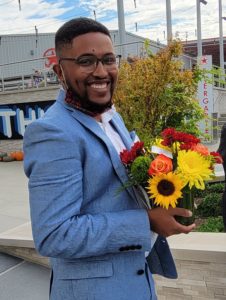 A Traveling Players student for four years, Ryan (he/they) is a veteran of the Thespian Ensemble, Shakespeare Ensemble, Commedia Ensemble and Shakespeare Troupe, plus various classes and the Reston Multicultural Festival.  This is Ryan’s sixth year on staff.  Ryan has worked for Traveling Players as a Director (As You Like It), Assistant Director (Hecuba, A Midsummer Night’s Dream, Two Gentlemen of Verona, As You Like It) and as a teacher.  Ryan is stoked to be working with Traveling Players year round and can’t wait to make an impact on their students!